“I’d made it this far and refused to give up because all my life I had always finished the race.” – Olympian Louis Zamparini – Devil at My Heels

“I’ve always been a competitive person. I knew that if I put myself in a high-level running environment I would do everything I could to rise to that level and compete.” – Louis Serafini 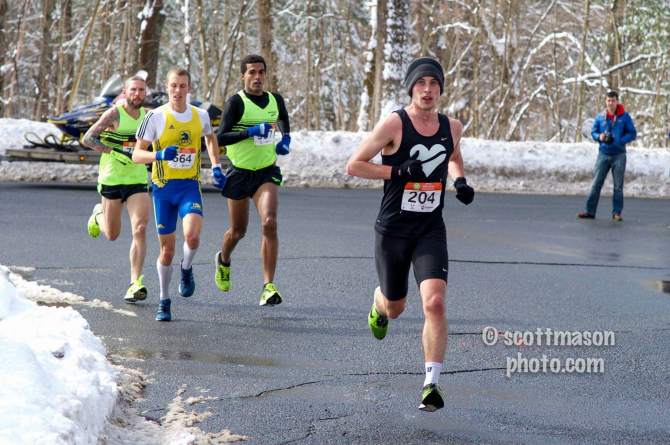 He’s 23-years old but Louis Serafini certainly doesn’t look his age. He bears more resemblance to a high school kid trying to keep up with older professional runners, getting double-takes as he moves to the front of the pack of local races. The Kid probably gets carded down at Mary Ann’s or over at the Green Briar in Brighton when he steps up to the bar to order a pint.  However, over the last couple of months or so, Serafini has been showing up and pushing the pace on the big boys, names like Ruben Sanca, Matt Pelletier, and Eric Ashe.

Some might even be a little scared of The Kid.

Serafini grew up in Niskayuna, New York, a small town upstate and ended up running a 4:13.61 1600-meters, earning All-State honors. His 3K never dipped below 8:57 but he seemed to have a talent when it came to distance running. He graduated high school and chose Boston College, where he was able throw down a 14:39 5000 meters on the track as well as a 24:30 for 8k X-C as a senior.

“I wanted to use running as a way to get an first-rate education. B.C. met the criteria,” says The Kid.

When he graduated from Boston College last spring, Serafini took a job as the manager at Heartbreak Hill Running Company in Newton.  He literally goes to work every day at the base of Heartbreak  Hill, smack dab at the 20-mile mark of Boston Marathon. Over this winter he has been logging 100+ miles a week through the cold, ice, and snow, favoring Commonwealth Ave’s carriage lane., a treadmill at work, the B.C. Rec Center, and other indoor tracks in the city to get his mileage in. His work has seemed to pay off for The Kid.

In late February, he traveled out to Amherst to compete in the hilly Five College Realtors’s 10-miler and finished 3rd overall behind Eric Ashe and Ruben Sanca, two established sub-2:20 marathoners: one was an Olympian the other an Olympic Trials qualifier. The Kid made a statement out at Amherst.

“I found myself at the front after the first two miles, which was fine because the pace was nothing crazy,” says Serafini, who maintained sub-5 minute pace out front.

He held the lead for awhile but the veterans came back on him at 5K.

“The turning point of the race was after the first hill at the three-mile mark. Eric and Ruben took off and when I made the decision to cover the move it was either stay with the leaders or run in no man’s land,” says The Kid. “From there I was able to tuck in, get comfortable and go for a ride…I think my fitness carried me through to the finish line.”

Serafini had been untested and wanted to see what his legs could do after a long winter training block.  He was itching to race against the best wanted to see if his efforts had paid off.

“It was definitely my best post-collegiate race to date,” he admits.

The tattooed veteran, Pelletier, recorded a win at Hartford (in an Olympic Trials qualifying 2:17) last fall, but just couldn’t catch The Kid, who finished 3rd in 50:39 (5:04 pace).  Serafini turned some heads as he announced his arrival in the Boston running scene.

During the days of late winter into early spring, the ghosts of marathons past move up and down the hills of Commonwealth Ave. Perhaps it is  Bill Rodgers out there in the miserable winter of 1975 or maybe Randy Thomas in 1978, possibly even “The Rookie” Alberto Salazar is out there somewhere in 1981, preparing for his future world record and Duel in the Sun with Beardsley. There’s a struggle of loneliness and even hopelessness in every Massachusetts marathoner, doing all that mileage and work. Questions….Will it pay off?  What if I fail? Can I catch these ghosts of marathon past? The Kid seems to be chasing them with his determination, not caring about the risks or cost of his efforts.

“To be honest,” Serafini says optimistically, “I’ve spent most of my time outside on the carriage lane on Comm. Ave. It’s safe, there are markers every mile, and I get in some hill work that I probably would not do otherwise. The carriage lane has been my best friend this winter.”

Then in mid-March, The Kid headed south to New Bedford for 13.1 miles on a historic course. He was ready but he was a little tired.

“The race plan was drastically different than Amherst,” says The Kid. “I wanted to establish a fast pace and test my fitness a little bit.”

So Serafini took it out hard.  Real hard. There was a new guy the mix, a fellow New Yorker, Sam Morse who caught The Kid at four miles and eventually went on to win in 1:06:09.

“We clicked off 4:45-4:50 miles pretty consistently for awhile and at the 8 mile mark I was starting to feel comfortable again,” says Serafini “Around the ninth mile I started to develop some tightness in my right calf. A gap opened up, I was fighting the wind alone, and my legs were trashed from going out hard and pushing the middle miles.”

And after a long week at the store, marathon training, and the long ride up to the South Coast, Serafini slowed, tired from the fast pace that he set early. It was a cold, blustery day in the Whaling City and that hill at 12 miles was just waiting for him. Serafini struggled in ended up running 1:08:15 and finishing 5th overall, a bit off his pace the following week at Amherst.  Another kid named Brian Doyle, son of legend Bobby Doyle finished runner-up passing the kid the second half of the race.

“I’m fairly confident that had I gone out conservatively that I could have contended for the win, but that was not my plan. New Bedford was a lesson in patience – a lesson that I needed going into longer races that I have coming up,” says Serafini.

The Kid has support though. He picked up a managerial position with Heartbreak Hill Running Company after working part-time since 2013. The owners, Dan Fitzgerald and Justin Burton (both BC track alums) have such a unique vision of the running industry and they continue to foster my passion for the sport.

“What I like most about the company is that with each day, it continues to evolve and as it evolves I continue to learn. The job is also great from a training perspective. The shops don’t open until later in the morning (HHRC at 10 and South End Athletic Company at 11) which means I have time to do my primary workout in the morning,” says Serafini. “There are a few late nights when we have events, but I’d rather be socializing with people in the shop than sitting at home counting the minutes to my next run/workout.”

Serafini has to be a little tired: he averages 95-100+ a week, a 15-mile bump from anything he did at Boston College.  He brought the mileage gradually up and then felt it was time to test himself.

“I started to get the “itch” to race again last summer. I started working in a few more light workouts, my 6 to 8 milers turned into 10 to 12 milers,” he says. “After a pretty solid summer/fall of running, I took some brief down time in December and started the work towards Boston. It’s been a patient build up and takes a lot of daily review but I could not be more pleased with how my training is going, considering I am “self coached.”

Still, the marathon is only focus as far as running is concerned. He ran a 2:36 last year at Key Bank Vermont City Marathon for 10th overall, the veteran Pelletier was 4th in 2:25. He had taken it out in 70 minutes the first 13.1 and crashed. However, he now felt the marathon was his race. 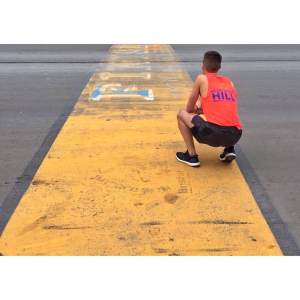 “I am trying hard not to look beyond April 20th,” says The Kid. “I do think about what’s next from time to time but when you’re coaching yourself and running alone most days, I think it’s important not to look beyond training blocks. For now, let’s just say you’ll see me out there chasing down some PRs this Summer and Fall.”

And the future looks bright for Louis Serafini. He seems ready to do something big on April 20th as he passes his workplace and sprints up Heartbreak Hill.